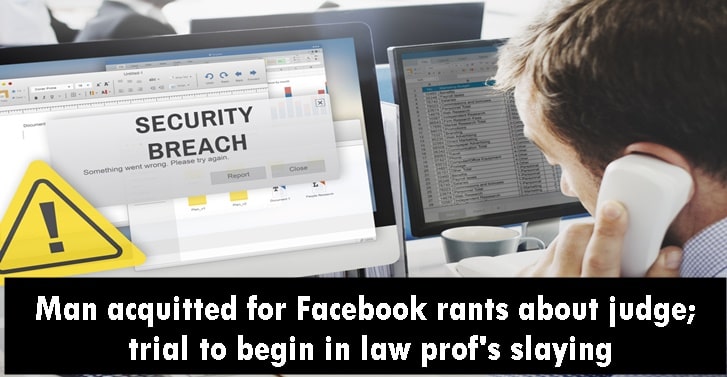 Jurors in Michigan deliberated for 26 minutes before acquitting a dad charged for his angry Facebook posts about a judge he blamed for his sonâs death. Jonathan Vanderhagen, 35, was acquitted on a misdemeanor charge of malicious use of a telecommunication device. His 21-month-old son had died in 2017 while Vanderhagen was seeking custody; Vanderhagen had contended the boyâs mother was failing to take the child to doctorâs appointments for hydrocephalus. Vanderhagen had reposted photos of the judgeâs family members and complained about possible corruption. In one post, he pictured himself holding a shovel with the judgeâs initials photoshopped on the handle. âYou best believe im gonna dig up all the skeletons in this courtâs closet,â Vanderhagen wrote. (The Washington Post, the Detroit News, the Detroit Free Press)

A Florida judge on Friday turned down a request for a separate trial by an alleged go-between in the 2014 slaying of Florida State University law professor Dan Markel. Judge James Hankinson ruled that Katherine Magbanua will have to be tried with another suspect, alleged triggerman Sigfredo Garcia. Magbanua worked in the dental office run by the Markelâs former in-laws. Prosecutors have suggested Markel was killed as part of a murder-for-hire plot, though no one has been charged besides Magbanua, Garcia and one of their associates, who pleaded guilty to second-degree murder. The trial is set to begin on Monday. The Tallahassee Democrat, WCTV)

A federal judge in California on Thursday issued an injunction from the bench to temporarily block a California law requiring presidential and gubernatorial candidates to disclose five years of tax returns to appear on the primary ballot. U.S. District Judge Morrison England Jr. ruled in five separate lawsuits challenging the law, including one filed by President Donald Trump. No presidential candidate has yet submitted tax forms to state officials as required by the law; its deadline for candidates in the March 3 primary is Nov. 26. (The Los Angeles Times)

Ginsburg explains why she didnât retire before Trumpâs election

Justice Ruth Bader Ginsburg explained Wednesday why she didnât retire during the presidency of Barack Obama. âWhen that suggestion is made, I ask the question: Who do you think the president could nominate that could get through the Republican Senate? Who you would prefer on the court than me?â Ginsburg said. The justice was questioned by NPRâs Nina Totenberg at a New York City event. (CNBC, MarketWatch)